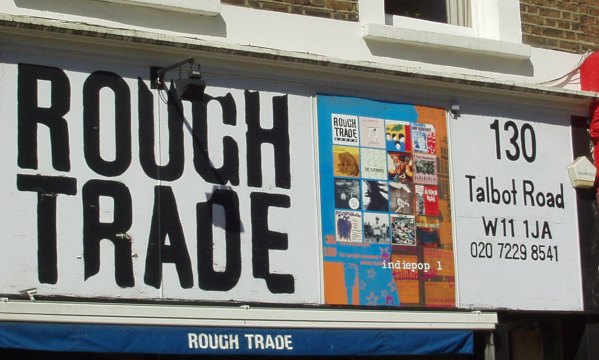 Rough Trads Shops indiepop 1 compiles 46 songs from the last 20 years with most of them from the late eighties as you would probably expect. While our own "The Sound Of Leamington Spa" series tries to uncover the more obscure side of the scene and ignores the big names, Sean from the Rough Trade shop in London who compiled the album went for a lot of 'big' names and I guess he tried to paint a wider picture. Lets group the bands into categories:

The first and biggest one is the UK 80s group consisting of "Primal Scream, The Popguns, The Clouds, The Sea Urchins, Jesus And Mary Chain, Monochrom Set, Felt, Shop Assistants, Jesse Garon and the Desperadoes, Television Personalities, The Wedding, Pop Will Eat Itself, I, Ludicrous, The Grove Farm, My Bloody Valentine, Josef K, Talulah Gosh, The Pooh Sticks, This Poison, The Vaselines, AR Kane, The Darling Buds, The Pastels, McCarthy, The June Brides, The Flatmates, Marine Girls and Razorcuts." This is pretty much what you would expect from such a compilation even though I thing some of them don't quite fit and others are missing, but in general this is a good list, you may want to hold some bands back for a second part. The selection of songs is fine as well even though again there are some odd choices.

In the next group are the Americans "Mary Lou Lord, Dressy Bessy, Beat Happening, The Magnetic Fields, The Velvet Crush and Eggs". This selection I find relatively disappointing, "Jingle Jangle Morning" And "100.000 fireflies" are fantastic and Beat Happening had to be on it, but the other three are not quite pop enough for me. There are many other US bands should have been in there place.

Next up are the UK 90s: Modesty Blaise, Katrina and V Twin, Helen Love, Heavenly, The Field Mice, Lush, Bis and Spearmint. I guess this reflects the fact that the 90s in the UK were a much less interesting time for the indiepop-kids than the 80s.

Rest of the world: "Juniper Moon" (Spain) and "Love is All" (Sweden), well this is a shame. For one thing because even though they are alright, there are many better Spanish and Swedish bands around and choosing these two to represent their countries is an odd choice. No bands from such big pop countries as Japan and Australia and New Zealand, no one from Greece, France or Germany. From right after 1986 indiepop was a global thing with fantastic bands from all other the place. Sean knows this as he is selling all the foreign stuff at the shop.

Finally the current bands: Camera Obscura and Aberfeldy, two Scottish bands with some impact but again ignoring the fact that most current indiepop is not happening in the UK.

Label-wise all the 80s big names are here, Creation, Subway, Sarah, 53rd & 3rd, but what about Siesta, Shelflife or Matinée?

Don't get me wrong, this is a fantastic double CD and a great introduction for an indiepop newbie, however for the serious fan there is nothing new here. I guess it is really hard to cover the whole 20 years on two CDs, but keeping out the indie-rock bits and having more foreign artists would have made it perfect.

My CD came without the booklet but it is suppose to be a great read.